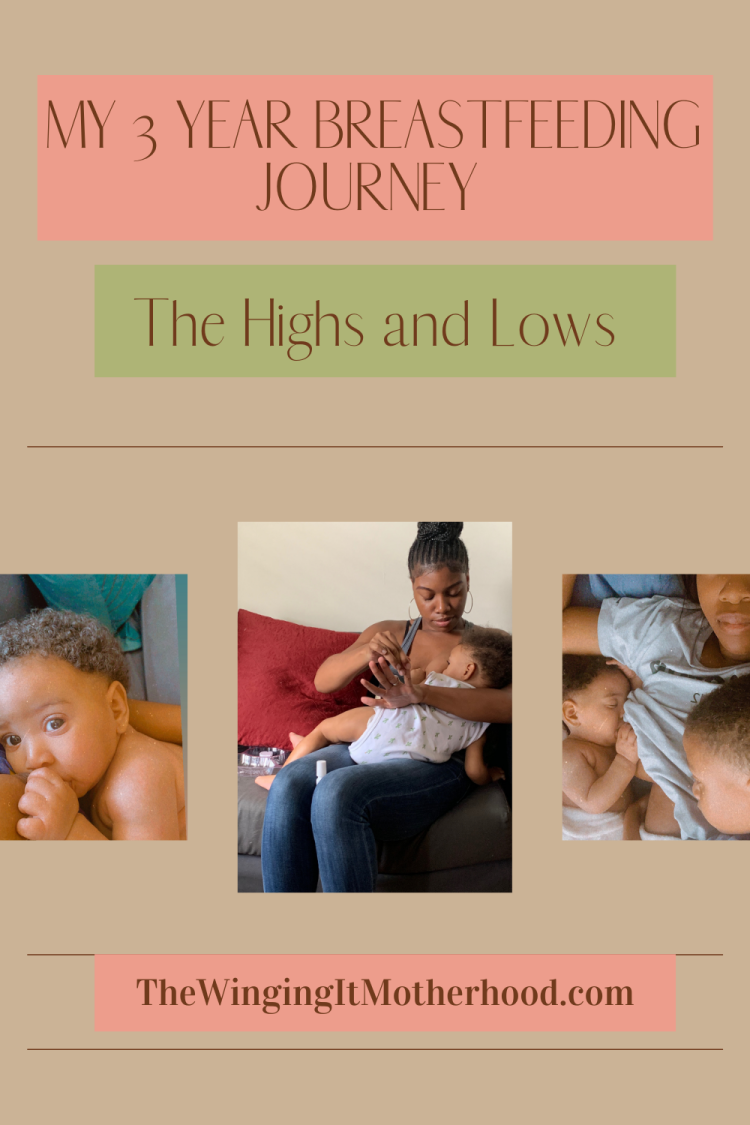 In honor of “Black Breastfeeding Week” I wanted to talk about my breastfeeding journey and some of the highs and lows I’ve encountered over the last three years. Having breastfed my son for two years, getting pregnant shortly after his second birthday and now breastfeeding my daughter exclusively, my journey has definitely been a life changing experience. But with every seemingly low point there has been a triumph right along with it to make it all worth while.

The First Latch: “No One Said It Was This Painful”

My first night in the hospital with my son as a first time mommy was one of the hardest situations I’ve ever experienced. I was a ball of emotions from trying to wrap my head around the fact that I was actually someone’s mommy and to add to my anxiety, I was desperately trying to figure out how to properly nurse my newborn. Once the nurses helped me get my hold down, I helped guide my son in for his first official latch and to my surprise, the pain was excruciating.

My nipple felt like it was being stuck with pins as my baby hungrily tugged at it to bring forth the colostrum. And the worst part of all were the contractions that the nursing triggered as my uterus was given the signal to work on shrinking back down to size. I laid in that hospital bed wondering where the nursing bond was that women raved about, feeling guilty that I wanted to quit already. My only push to continue felt like obligation.

My Worst Fear: “He’s Not Getting Enough Milk

The first night home from the hospital with my first born was definitely a shock to my system. (Had they actually let me leave the hospital with this baby?) It felt all too real that my husband and I were fully responsible for caring for this little one and the responsibility was suffocating. First on the list, make sure he doesn’t starve. Now as a veteran breast feeder I now know that your full milk supply doesn’t come in for a few days but during that first night home I panicked when my son was crying from what seemed to be hunger. I rushed my husband to the store to get formula to supplement and as a result, over fed my newborn. My husband and I still talk about next day that blow out because of our baby being over fed. (It shot out all over my husband.)

Starting To Get My Stride

After a month of breastfeeding my son I felt like I was really getting the hang of it. My milk supply had come in fully and also adjusted to his nursing behaviors. The pain had long since passed and the bond that I desperately wanted to feel while nursing was finally there. I was in awe at my body and its ability to nourish my baby. In addition to that I was so overjoyed to be my baby’s safe place. Nursing brought him so much comfort and I felt at peace knowing that I could soothe him with nursing whenever he needed it.

Back to Work and Pumping

After three months of being with my baby around the clock, my maternity leave was over and I had to go back to work. It was a shock to my system to no longer be able to nurse my baby on demand and having only my lunch break to pump, drastically affected my milk supply. I had to supplement with formula and for the most part while I was at work and nursed at home, mainly for my son’s comfort.

I had initially planned to stop nursing my son a one year old but that didn’t happen at all. I ended up nursing him until he was two. Around the time my son was 1 1/2 was when I felt like my body was feeling depleted and that it was taking a tole in me physically to continue to nurse. My son was getting the majority of his nourishment from solids at that time and mainly just nursing to sleep.

The bonding that I felt from nursing was starting to feel burdensome again and the anxiety from feeling “touched out” was getting to be too much. By the time my son was two, I hardly had any milk at all and decided to stop nursing altogether after his second birthday. The first few days of weaning was rough, mainly at naps and bedtime, but after a week he stopped asking to nurse. I was amazed and a little sad that my nursing journey with him was over but I felt so free having my body back.

Little did I know, about three weeks after my son stopped nursing I would get pregnant with my daughter. (Having my body to myself did not last long at all) . Nine months after weaning my son I was right back to nursing again. This time around things have been a breeze. I’ve nursed my daughter exclusively and have felt much more knowledgeable about breastfeeding this time around. I don’t have the fear I had before around nursing in public or being judged for nursing in certain situations. I whip them out whenever, wherever my daughter is hungry. I think it’s also helped tremendously that I only returned to work part time and now have chosen to stay home with my babies full time. I didn’t experience that drastic drop in milk supply this time around and as a result have never had to supplement for my daughter.

The biggest lesson that I’ve learned during my 3 year breastfeeding journey has been to be gentle with myself. I would be so hard on myself anytime I had to supplement or anytime I wanted to quit breastfeeding. I felt selfish once I started to wean my son. I felt like I was being rude when I nursed in public. I was way too hard on myself with every decision that I made. From all of that I’ve learned that my mental health matters and that my feelings are valid. I’ve learned to fully acknowledge when I’m uncomfortable or need a break to ground myself and feel like my life and body is my own and that’s okay. Being gentle with yourself is a key point to thriving in motherhood.